Since November 27, 2016, all the Daily Office Old Testament readings have been from the Book of Isaiah.  (As illustrated at right.)  The final reading from the Book of Isaiah came today, Sunday, February 19, 2017.  (That works out to a total of 85 consecutive daily Bible readings from Isaiah.)  And which also could be translated:  That is one long book!

That final reading was Isaiah 66:7-14.  And parts of that final Bible reading reminded me of the ending of a more-recent tome, John Steinbeck’s controversial Grapes of Wrath:

At the time of publication, Steinbeck’s novel “was a phenomenon on the scale of a national event.  It was publicly banned and burned by citizens, it was debated on national talk radio; but above all, it was read.”

One big reason the novel got banned and burned was its “surprise ending.”

That is, near the book’s end, the Joad family finds shelter in a barn from flooding rains.  There they find a boy and his starving father.  “Rose of Sharon,” one of the characters, has just miscarried; lost her baby.  But seeing the starving father, she feeds him from her breast:

Rose of Sharon loosened one side of the blanket and bared her breast.  “You got to,” she said. She squirmed closer and pulled his head close.  “There!” she said.  “There.”  Her hand moved behind his head and supported it.  Her fingers moved gently in his hair.  She looked up and across the barn, and her lips came together and smiled mysteriously.

See Is This The Creepiest Ending Ever? | 101 Books.  Which pretty much gives away that blogger’s opinion.  For one thing, he started off the post by saying, “If you’ve read the novel, you know that last paragraph is just weird – and a little graphic.”

He ended by noting there was “all kinds of symbolism going on there” – in the book version, shown at left – but that nevertheless, Steinbeck wrote a “creepy, uncomfortable ending.”  He then asked,  “Am I wrong here?  Is that possibly the creepiest ending in all of literature?”

Overall, the reading is one giving comfort to a long-suffering people.  As in Isaiah 66:13: “As a mother comforts her child, so I will comfort you…  When you see this, your heart will rejoice and you will flourish like grass.”  But right before that came some really graphic imagery:

Rejoice with Jerusalem, and be glad for her, all you who love her;  rejoice with her in joy … that you may nurse and be satisfied from her consoling breast;  that you may drink deeply with delight from her glorious bosom.

See Isaiah 66:10-11.  Of course, to my knowledge no one has debated whether this “graphic ending” to the Book of Isaiah was good and proper.  (As in Grapes of Wrath – The debate of the anticlimax, which closed with the rhetorical question:  “can the anticlimax … be seen as a cynical plot device that plays with the reader’s emotions or genius piece of creative writing?)

Nor – to my knowledge – has any smart aleck read the last part of Isaiah and warned others, “You’ll Never Think Of ‘The Milk Of Human Kindness’ In The Same Way Again.”  (See The Grapes of Wrath What’s Up With the Ending?)  And finally, nobody has called Isaiah 66:11 “creepy.”

So – just in case I’m being too subtle – there are a couple points being made here.

Which leads up to the second point, that Isaiah was a great book:

In Christian circles, it was held in such high regard as to be called “the Fifth Gospel,” and its influence extends beyond Christianity to English literature and to Western culture in general, from the libretto of Handel’s Messiah to a host of such everyday phrases as “swords into ploughshares” and “voice in the wilderness.”

And it didn’t get that way by being “conservative.”  Put another way, one major theme of this blog is that the Bible was written to stretch and expand the human mind, not restrict it.  It was not written to make people boot-camp Christians.  (See the notes below.)

Put another way, the Book of Isaiah – and indeed the Bible as a whole – was written and designed to give us all a “rich store of salvation and wisdom and knowledge.”

Even if it does have a bit of a “creepy ending…” 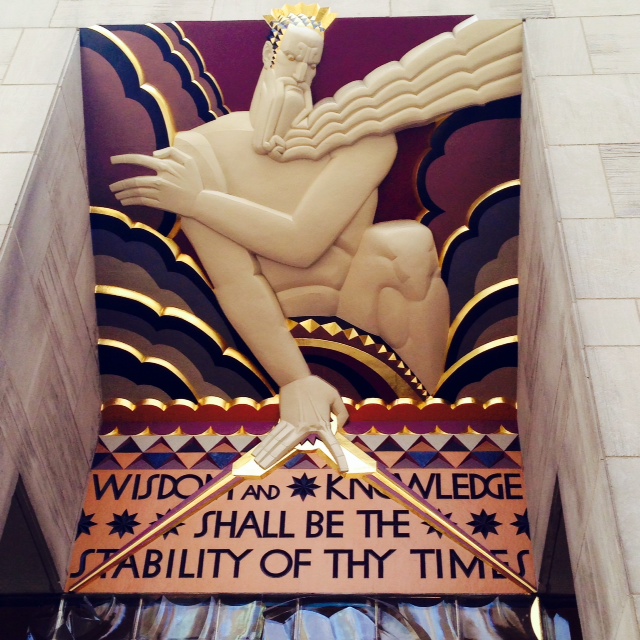 Detail of the entrance to Rockefeller Center, citing a verse from Isaiah 33:6…

The upper image is courtesy of drifting cowboy: Best Chatsworth Movies — The Grapes of Wrath (1940a-drifting-cowboy.blogspot.com.  And incidentally, the painting in the movie poster was done by the artist Thomas Hart Benton.  See Wikipedia.  See also Thomas Hart Benton | Departure of the Joads. [The Grapes of Wrath Series.  See also the grapes of wrath | Movie Poster Museum.

The painting of Isaiah is courtesy of the Wikipedia article, Book of Isaiah.  The caption:  “Michelangelo (c. 1508–12), ‘Isaiah,’ Vatican City:Sistine Chapel ceiling.”

For a more-erudite view on Isaiah’s imagery, see Isaiah 66:11 Commentaries: That you may nurse and be satisfied with the breasts of her consolations.

For another Steinbeck book using themes from the Bible, see East of Eden (novel) – Wikipedia:

The book explores themes of depravity, beneficence, love, and the struggle for acceptance, greatness, and the capacity for self-destruction and especially of guilt and freedom.  It ties these themes together with references to and many parallels with the biblical Book of Genesis (especially Genesis Chapter 4, the story of Cain and Abel)…  The title, East of Eden, was chosen by Steinbeck from Genesis, Chapter 4, verse 16: “And Cain went out from the presence of the Lord, and dwelt in the Land of Nod, on the east of Eden” (King James Version).

The lower image is courtesy of Book of Isaiah – Wikipedia.  The caption:  “Detail of entrance to 30 Rockefeller Plaza showing verse from Isaiah 33:6 Rockefeller Center, New York.”  Isaiah 33:6 reads: “He [God] will be the sure foundation for your times, a rich store of salvation and wisdom and knowledge;  the fear of the LORD is the key to this treasure.”

And finally, for another “earthiness” in reading and/or interpreting the Bible, see the notes to On sharing the “Keys to the Kingdom.”