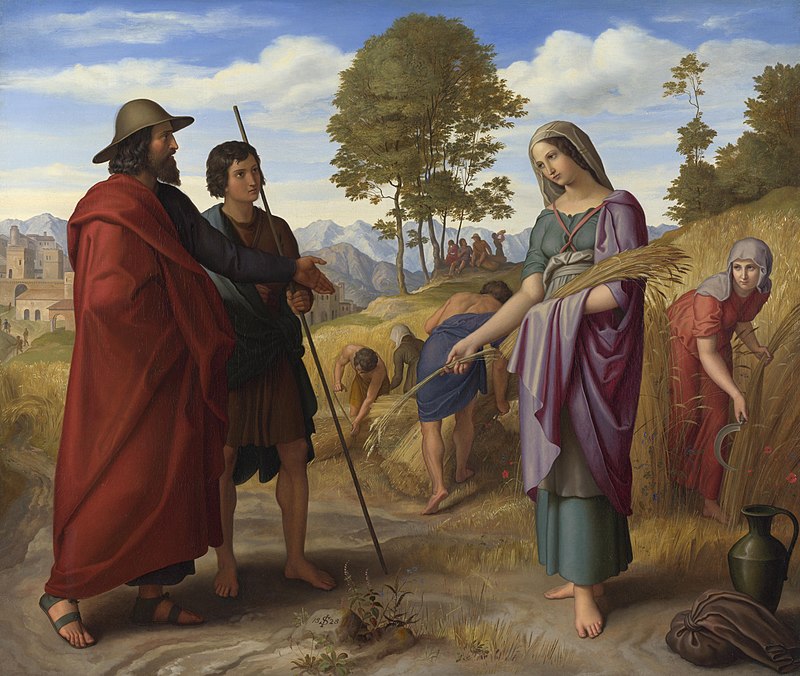 “Ruth on the fields of Boaz,” from today’s first reading…

Earlier this week I planned to do a time-to-read-it post on the Bible readings for Sunday November 8.  Then I came across the New Testament Daily Office Reading – a term illustrated at right – for Thursday, November 5.  That reading – Revelation 14:1-13 – told of the “144,000” who seem to be already chosen:

Then I looked, and there was the Lamb, standing on Mount Zion!  And with him were one hundred and forty-four thousand who had his name and his Father’s name written on their foreheads…  No one could learn that song except the one hundred forty-four thousand who have been redeemed from the earth…  They have been redeemed from humankind as first fruits for God and the Lamb … they are blameless.

All of which gave me pause for thought.  I seemed to remember some literalists who insist that only 144,00 people will make it to heaven.  In turn, this passage from Revelation seemed to say that those “mere 144,000” have already been chosen.

Since my spiritual “self” is at stake, I decided to explore the issue further.

Again, the emphasized parts above seem to show that these 144,000 people are the only ones who will make it to heaven, according to some “literalists.”  Put another way, if taken literally, that Bible passage – either taken literally or out of context – seems to mean that the “144,00” have already been chosen, and that us poor schmucks today are out of luck.

My research led me first to  Who Are the 144,000 in Revelation?  That article gave five reasons indicating the number is a metaphor:  “The 144,000 represent the entire community of the redeemed:”

Fifth, the last reason for thinking that the 144,000 is the entire community of the redeemed is because of the highly stylized list of tribes in verses 5-8.  The number itself is stylized.  It’s not to be taken literally.

Then I checked out 144000 – Wikipedia:  “The number 144,000 has religious significance for Christians because of its use in the Book of Revelation.”  The article added that the numbers 12,000 and 144,000 are “variously interpreted” in Christianity, with some saying the 144,000 is symbolic.  But others insist the numbers “are literal numbers … representing either descendants of Jacob … or others to whom God has given a superior destiny with a distinct role at the time of the end of the world.”  Then there are Jehovah’s Witnesses:

Jehovah’s Witnesses believe that exactly 144,000 faithful Christian men and women from Pentecost of 33 CE until the present day will be resurrected to heaven as immortal spirit beings to spend eternity with God and Christ…   Individual Witnesses indicate their claim of being “anointed…”  Nearly 12,000 Witnesses worldwide … claim to be of the anointed “remnant” of the 144,000.

And finally I came across Who Are the 144,000 of Revelation 7 and 14? : Christian Courier.  The article began by saying the Book of Revelation is a “highly symbolic treatise.”  As a result, “many false religionists have attempted to exploit the message of the narrative to their own theological ends.”  (“The Apocalypse has become a happy hunting ground for some religious cultists who seek biblical support for their peculiar doctrines.”)  It then added:

The “Jehovah’s Witnesses” have almost no concept of the distinction between the literal and the figurative language in the Bible.  And so, they literalize the number 144,000 in these two contexts, and ridiculously argue that only 144,000 people will gain heaven.

Which seemed to fit in with the theme of this blog.  See for example THE BASICS:

See also The DORs for July 20, and On dissin’ the Prez.  So to reiterate:  “Reading the Bible literally is a great place to start,” but ” if you really want to be all that you can be, you need to go on and explore the ‘mystical side of Bible reading.'”

And now, back to the Bible readings for November 8.

But first a brief word about November 2, “All Souls’ Day.”  It’s formally known as the Commemoration of All Faithful Departed, and is the third day of the “Triduum of Halloween.”  See “All Hallows E’en” – 2015.  And for a fuller set of prayers and/or explanation, see the All Faithful Departed link, at the Satucket website, where you can find the Daily office readings.

Now  back to the story of Ruth.  Briefly, she was a “foreigner” who married a son of Naomi, who then died.  But rather than return to her people after her husband died, Ruth opted to stay with Naomi, as detailed most famously in Ruth 1:16.  In the King James Version (the one God uses), the passage reads:  “For whither thou goest, I will go; and where thou lodgest, I will lodge: thy people shall be my people, and thy God my God.”

As a result and among other things, Ruth’s expression of faith made her an ancestor of Jesus:

So Boaz took Ruth and she became his wife.  When they came together, the LORD made her conceive, and she bore a son…   The women of the neighborhood gave him a name, saying, “A son has been born to Naomi.”  They named him Obed; he became the father of Jesse, the father of David…

The psalm for the day is Psalm 127, which includes verses 5 and 6:  “Like arrows in the hand of a warrior are the children of one’s youth.  Happy is the man who has his quiver full of them!  He shall not be put to shame when he contends with his enemies in the gate.”

As to Psalm 127, see On Bill Tyndale – who did up a Bible you could actually READ!  That post presented another example of some people taking isolated passages of the Bible out of context:

The New Testament reading is from the Epistle to the Hebrews.  According to scholars its writing is “more polished and eloquent than any other book of the New Testament.”  It’s also “earned the reputation of being a masterpiece.”  It is thought to have been “written for Jewish Christians who lived in Jerusalem,” and that its purpose was to exhort Christians to persevere in the face of persecution.   The reading today distinguished Jesus from “earthly” priests:

Christ did not enter a sanctuary made by human hands, a mere copy of the true one… Nor was it to offer himself again and again, as the high priest enters the Holy Place year after year…  Christ, having been offered once to bear the sins of many, will appear a second time, not to deal with sin, but to save those who are eagerly waiting for him.

And finally, the Gospel for the day is Mark 12:38-44.  The second part of that reading tells the Lesson of the widow’s mite.  (As shown at left, compared with a penny today.)

In the story, “a widow donates two small coins, while wealthy people donate much more.  Jesus explains to his disciples that the small sacrifices of the poor mean more to God than the extravagant, but proportionately lesser, donations of the rich.”   Or as noted in Mark 12:44, “For all of them have contributed out of their abundance;  but she out of her poverty has put in everything she had, all she had to live on.”  But see also Missing the Point of the Widow’s Mite | Dating God:

A reading of Jesus’s comments that appears to hold the widow up on a pedestal is, I believe, a perpetuation of this injustice that inflicted the widow of Jesus’s time and continues to affect the poor and vulnerable in our day…  Jesus is not endorsing this behavior, but blatantly naming it for what it is … and challenging us to see the structures that allow this to continue…  Why do we let this continue to happen such that the poor give until it hurts and the wealthy seem to so often benefit from this self-defeat of the impoverished? The upper image is courtesy of Ruth (biblical figure) – Wikipedia, the free encyclopedia.  The full caption: “Ruth on the fields of Boaz, by Julius Schnorr von Carolsfeld.”

The “tombstone” image is courtesy of the Satucket link All Faithful Departed (All Souls’).

Re: “Dating God.”  See also Dating God | Franciscan Spirituality for the 21st Century, and/or Dating God | America Magazine.  The blog is written by Daniel P. Horan, a “Franciscan Friar (of the Order of Friars Minor of Holy Name Province,” a Franciscan spiritual writer, and currently a Ph. D. student “in systematic theology at Boston College.”  See America Magazine and/or Wikipedia.

The lower image is courtesy of the “The Widow’s Mite” link at Bible Illustrations, by G. Dore – Main Page – Creationism.org.  The article added this about the artist:

French artist Gustave Doré (1832-1883) produced hundreds of quality Bible story illustrations in his lifetime…   Doré’s realistic style breathed new life into these real stories.  Centuries of [images] had caricaturized many Bible stories in the minds of believers.  But his persons and places look real.  Gustave Doré’s work (and artistic license) was criticized by some in his own day, but these illustrations stand the test of time as good physical representations of important Biblical events…

This web link – Creationism.org – includes a plethora of examples of Dore’s work.  And just for the reader’s edification, the F A Q link includes this question:  “Didn’t the Scopes Trial in 1925 (a.k.a. the Monkey Trial) show that evolution had won and creation lost – big time!”  It also provided this answer: “That’s what the liberal media and Hollywood have consistently reported since then.”

Be that as it may, the website still has a very nice collection of Gustave Doré pictures…