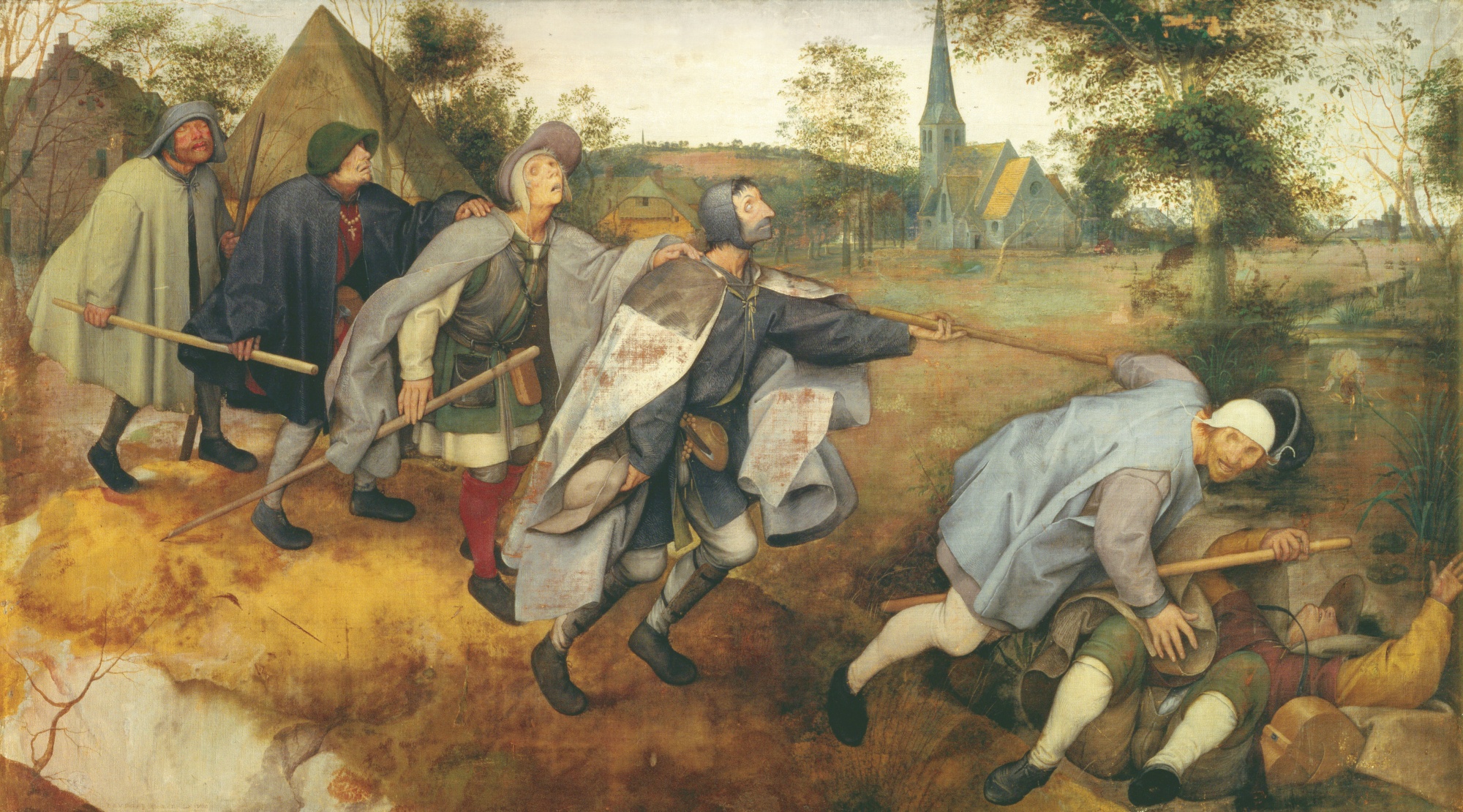 “The blind leading the blind,” as told in the DOR Gospel for Monday, November 9…

Ever since Thursday, October 29, the Old Testament Daily Office Readings have been from the Book of Nehemiah.  (Interspersed with readings from Ezra.)  So today I’ll focus on these two men, along with the parable of Jesus about the blind leading the blind, as shown above.

Nehemiah worked to rebuild the city walls around Jerusalem at the end of the Babylonian exile. And together, Ezra and Nehemiah both worked to restore the glory of Israel.

Here’s what happened.  In 606 B.C., Babylon‘s king – Nebuchadnezzar – conquered Judea and its capital Jerusalem.  Then came the first of many Jewish mass deportations, and especially of:

… young men without physical defect and handsome, versed in every branch of wisdom, endowed with knowledge and insight, and competent to serve in the king’s palace;  they were to be taught the literature and language of the Chaldeans.

Here’s what Wikipedia said of Nehemiah and Ezra:

The books of Ezra and Nehemiah were originally one scroll…  Later the Jews divided this scroll and called it First and Second Ezra.  Modern Hebrew Bibles call the two books Ezra and Nehemiah, as do other modern Bible translations…    Ezra, a descendant of Seraiah the high priest, was living in Babylon when … Artaxerxes, king of Persia, the king sent him to Jerusalem…    Some years later Artaxerxes sent Nehemiah (a Jewish noble in his personal service) to Jerusalem as governor…

Together, the books tell of the return from exile in three different stages: 1) The initial return and rebuilding the Temple;  2)  The missions of Ezra and Nehemiah;  and 3)  The story of Nehemiah, “interrupted by a collection of miscellaneous lists and part of the story of Ezra.”  (Which explains the order of Daily Office Readings since October 29.)

Ezra’s job was to “teach the laws of God,” to both returning exiles and those who’d been Left Behind in Judea.  That is, Ezra himself – seen at right in an iconograph – led a number of exiles back to Jerusalem from Babylon.  Once there he found that “Jewish men had been marrying non-Jewish women.”  He responded as follows:

He tore his garments in despair and confessed the sins of Israel before God, then braved the opposition of some of his own countrymen to purify the community by enforcing the dissolution of the sinful marriages.

On the other hand, Nehemiah’s mission was to rebuild and repair the city walls.  (During the exile the walls of Jerusalem had crumbled into disrepair.)

As told earlier in Nehemiah 6:15, the walls were rebuilt in just 52 days.  (Of constant, round-the-clock effort, and despite an ongoing “constant threat of those who opposed their efforts, including the armies of Samaria, the Ammonites and the Ashdodites.”)  Then came this:

Once this task was completed Nehemiah had Ezra read the Law of Moses (the Torah) to the assembled Israelites, and the people and priests entered into a covenant to keep the law and separate themselves from all other peoples.

See also Nehemiah – Wikipedia (with the image at left), and Nehemiah—The Man Behind the Wall – Biblical Archaeology Society.

Now, getting back to the reading for Monday, November 9…

The specific OT reading is Nehemiah 9:1-15(16-25).  It’s a long one, and begins with the people of Israel re-assembled, with “fasting and in sackcloth, and with dust on their heads.”  Ezra then recited a prayer recalling the history of Israel, with “signs and wonders against Pharaoh and all his servants and all the people of his land, for you knew that they acted insolently against our ancestors.”

The prayer in today’s reading ended with Ezra’s note that after they entered the Promised Land, the Children of Israel “ate, and were filled and became fat, and delighted in your great goodness.”  But that happiness was short-lived, and ultimately led to defeat and exile:

Here we are, slaves to this day – slaves in the land that you [God] gave to our ancestors to enjoy its fruit and its good gifts.  Its rich yield goes to the kings whom you [God] have set over us because of our sins;  they have power also over our bodies and over our livestock at their pleasure, and we are in great distress. 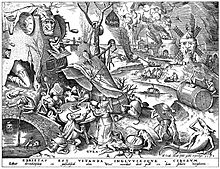 That reading from the next day – Tuesday, November 10 – could serve as a warning to those today who choose to become “fat, filled, and delighted.”  (See Nehemiah. 9:26-38.  And in some foreshadowing, Pieter Brueghel the Elder did the engraving at right, “Gluttony,” in 1558.)

Then too, that warning could apply whether taken literally, metaphorically, “or otherwise.”  Which is another way of saying toa Baby Christian,  “It is to vigor – not comfort – that you are called.”  (See On a dame and a mystic, and/or The basics, above.)

“This people honors me with their lips,
but their hearts are far from me; in vain do they worship me,
teaching human precepts as doctrines.”

And finally, that Gospel for today included the parable of The blind leading the blind.

This metaphor was memorably illustrated by Pieter Brueghel the Elder – his self-portrait is at left – and as discussed below:

The painting reflects Bruegel’s mastery of observation.  Each figure has a different eye affliction, including corneal leukoma, atrophy of globe and removed eyes.  The men hold their heads aloft to make better use of their other senses.  The diagonal composition reinforces the off-kilter motion of the six figures falling in progression.  It is considered a masterwork for its accurate detail and composition.

The Phrase Finder said it was likely “inherited from the Upanishads – the sacred Hindu treatises … written between 800 BC and 200 BC and first translated into English between 1816-19:”

From Katha Upanishad we have [this]:  “Abiding in the midst of ignorance, thinking themselves wise and learned, fools go aimlessly hither and thither, like blind led by the blind.”

So the lesson could be this:  “Don’t go around ‘in the midst of ignorance, thinking yourself wise and learned…'”  Or as it says in Ecclesiasticus 5:5, “Do not be so confident of forgiveness that you add sin upon sin.”   (See also On Ecclesiasticus – NOT “Ecclesiastes“.) 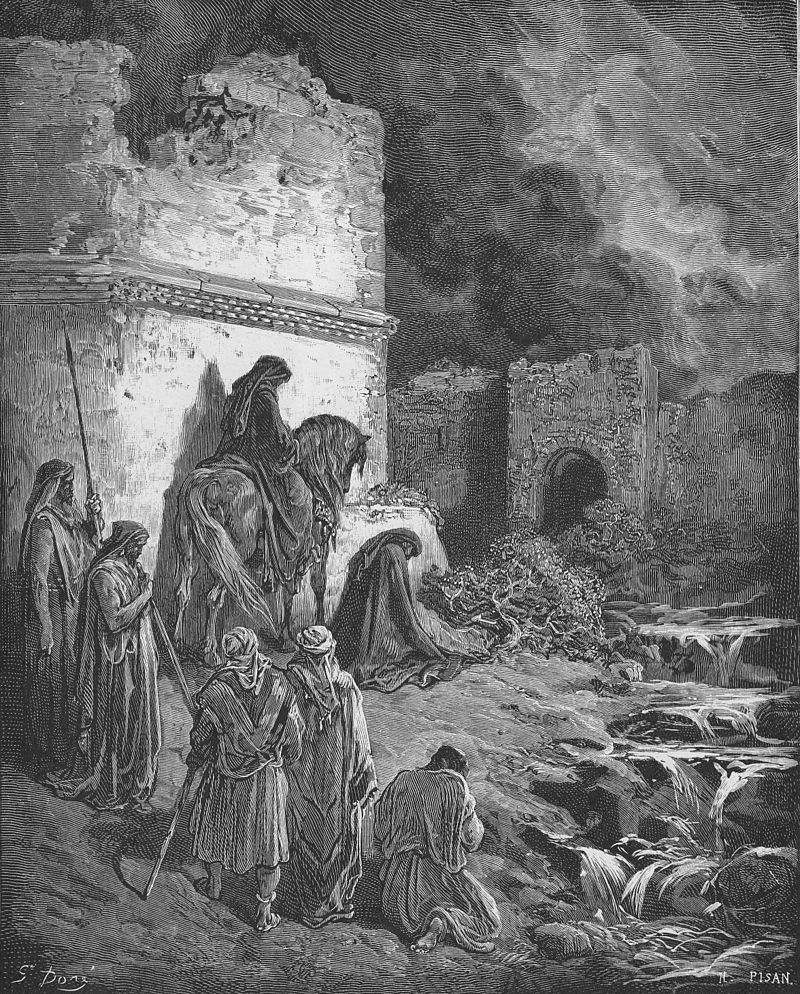 The upper image is courtesy of The blind leading the blind – Wikipedia.  The full caption:  “The Blind Leading the Blind by Pieter Bruegel the Elder, 1568.”

For more on the “Babylonian Exile” at issue, see Shadrach “et al.” and the Fiery Furnace.  As to the “why” of rebuilding the walls, see Why was it important to rebuild the walls around Jerusalem?

Re: The relation of Artaxerxes to Nebuchadnezzar.  See Ahasuerus – Wikipedia, which noted first that the “name Ahasuerus is equivalent to the Greek name Xerxes.”  Also, “Ahasuerus is also given as the name of a King of Persia in the Book of Ezra.  Modern commentators associate him with Xerxes I who reigned from 486 BC until 465 BC.”   (For what all that’s worth…)

The image of Ezra is courtesy of Ezra – Wikipedia.  The full caption: “Ezra from Guillaume Rouillé‘s Promptuarii Iconum Insigniorum.”   Rouillé (c.1518–1589) was a “prominent humanist bookseller-printer“ in 16th-century Lyon.  “He invented the pocket book format … printed with sixteen leaves [and] half the size of the octavo format.”   Iconography is a branch of art history concerned with the “identification, description, and the interpretation of the content of images.”  The word comes from the Greek words for “image” and “to write.”

Re:  “This people honors me with their lips…”  In Matthew 15:8-9, Jesus cited Isaiah 29:13.  Thus – as noted in the Pulpit Commentary – He and a host of other prophets rejected literalism:”

“They use the prescribed forms of worship, guard with much care the letter of Scripture, observe its legal and ceremonial enactments, are strict in the practice of all outward formalities…”  [In other words:]  “Prayers, sacrifices, etc., are altogether unacceptable unless inspired by inward devotion, and accompanied by purity of heart.” (E.A.)

Which is pretty much the theme of this blog…

The “Gluttony” and “Brueghel” images are courtesy of the Wikipedia article describing the specific painting, and the “artist Pieter Bruegel the Elder” link contained therein.  The caption for the latter: “The Painter and The Connoisseur, c. 1565 is thought to be Bruegel’s self-portrait.”

The “vigor-comfort” quote is from Practical Mysticism, with more advice for a new Christian:

Re:  “Ecclesiasticus.”  It’s also known as The Book of the All-Virtuous Wisdom of Joshua ben Sira … commonly called the Wisdom of Sirach or simply Sirach.  See Wikipedia.

The lower image is courtesy of Nehemiah – Wikipedia, the free encyclopedia.  The full caption:  “Gustave Doré, Nehemiah Views the Ruins of Jerusalem’s Walls, 1866.”