Matthew 18:6, on Jesus and His heavy millstone for those who “offend these little ones…”

The fourth – and most overlooked – is the need to read the Bible with an open mind.  See Luke 24:45:  “Then He” – Jesus – “opened their minds so they could understand the Scriptures.” 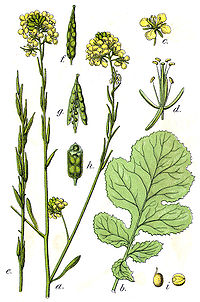 The Gospel reading for Monday, June 18, included Matthew 17:20.  That’s where jesus said this:

Truly I tell you, if you have faith as small as a mustard seed [as seen at left], you can say to this mountain, ‘Move from here to there,’ and it will move.  Nothing will be impossible for you.”

I wanted to connect that verse to John 14:12, noted above.  That’s where Jesus said He expected His disciples to perform greater miracles than He did.  (And how no Christian can hope to do that by reading the Bible in a cramped, “strict” or literal way.)

But first a word about the Trump Administration’s “Koncentration Kamps for Kiddies.”

For starters, officials including Attorney General Jeff Sessions and Sarah Huckabee Sanders cited the Bible to support such separation camps.  Specifically, Romans 13, vis-a-vis Submission to Governing Authorities.  But that in turn sparked a backlash.  See for example The Bible verse Jeff Sessions used to defend immigration crackdown once also defended slavery.  And, more recently, A Brief History of People Using Romans 13 to Justify White Supremacy, and The Real Story Behind the Nazi Establishment’s Use of ‘Romans 13.’

(And by the way, the Conservatives now in power seem to have forgotten all about  Romans 13 when Barack Obama was president.  And they were “failing to obey” him.)

Meanwhile, Monday on Facebook I cited some other quotes from the Bible.  They included Luke 18:16 and Matthew 18:6.  (And – in a potential “Sign from God” – it turned out that Matthew 18:6 was part of the Gospel reading for Wednesday, June 20.)

In Luke 18:16, Jesus said, ”Let the little children come to me, and do not hinder them, for the kingdom of heaven belongs to such as these.”  More to the point, Matthew 18 starts with this:

Which just goes to show that Jesus – unlike too many officials in the current Administration – had a special place in His heart for innocent, unspoiled children.

But wait, there’s more!  Jesus went on to give an even more specific warning.  (Like maybe for some who purport to follow Him, but who are in fact “slow learners?”)

For example, in Matthew 18:5 Jesus said, “And whoever welcomes one such child in my name welcomes me.”  Which seems pretty clear.  But just in case there are some really slow learners out there, Jesus went on to add this proviso, in Matthew 18:6:

“But whoso shall offend one of these little ones which believe in me, it were better for him that a millstone were hanged about his neck, and that he were drowned in the depth of the sea.”

And by the way, that’s from the King James Bible.  (You know, the one God uses?)

Further – since we’re dealing with slow learners here – let’s point out that since most of the children now in “tent cities” in the Southwest come from Mexico, they are almost all both Christian and Catholic.  (See Religious Beliefs In Mexico – WorldAtlas.com: “More than 90% of Mexicans identify as Christians, and more than 90% of those Christians are Roman Catholic.”)

Therefore, we can safely deduce that the overwhelming majority of those children now being separated from their parents qualify under Jesus’ “little ones who believe in me” proviso.

So, in the manner of Bill Engvall and his “Here’s Your Sign” comedy routine:  To Jeff, Sarah (and others in the Administration), “Here’s your millstone!”

Meanwhile, back to Matthew 17:20.  (And moving mountains with faith the size of a mustard seed.)  Thanks to such “flaming liberals” as Franklin Graham, Laura Bush, and Orrin Hatch – along with 12 other Republican Senators – Donald Trump just signed an executive order ending family separations.  In other words, enough people from both parties got together and got Donald Trump to change his mind, and maybe even to see the light!

The upper image is courtesy of Millstone – Image Results.

The “mustard” image is courtesy of Parable of the Mustard Seed – Wikipedia.

Re:  “Romans 13, vis-a-vis Submission to Governing Authorities.”  Jeff and Sarah also apparently failed to recognize that in America, “We the People” are the governing authority, not some temporary office-holder.  See also Preamble to the United States Constitution – Wikipedia.